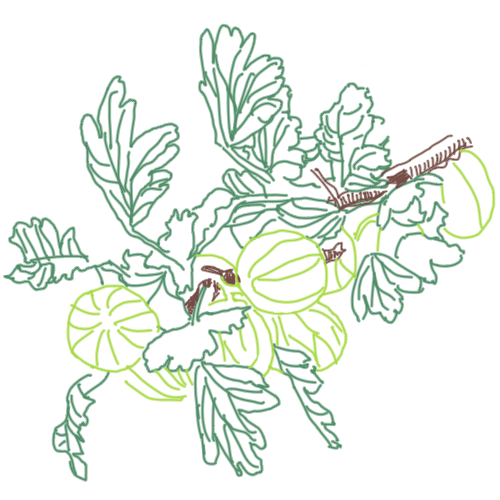 Gooseberries are a somewhat unusual fruit that are greatly prized in all other northern countries but hardly known on this side of the Atlantic. Many varieties of this shrub have significant thorns, which is part of the reason that Emily chose the Black Velvet (Ribes grossularia) cultivar with its small thorns for our Basic Starter Kit.

American and European gooseberries are grown in the United States. American varieties are the most common, as they are more resistant to diseases, are more productive, and have fruits of better quality. The European varieties are superior only in bearing much larger and more handsome fruit and having a far greater diversity of varieties. Black Velvet is a hybrid of gooseberry and Worcesterberry, described as having small, dark red, sweet, high quality fruit with a superb, almost blueberry-like flavor.

Gooseberries are deciduous shrubs, fast growing under optimum conditions to 3 feet tall and 6 feet wide. Annual growth is in a single flush in spring. The roots are superficial, fine, and easily damaged by frequent cultivation.

The inconspicuous flowers, green with pink flushed petals, open in early spring. They are borne laterally on one-year-old wood and on short spurs of older wood. The flowers are self-fertile and pollinated by wind and insects, including bees. Each flower bud opens to yield from one to four flowers, depending on cultivar.

The fruit, borne singly or in pairs at the axils, is a berry with many minute seeds at the center. Gooseberries may be green, white (gray-green), yellow, or shades of red from pink to purple to almost black. As its name indicates, the Black Velvet gooseberry is a dark reddish-purple, almost black berry.

Gooseberries like morning sun, afternoon part-shade, and buoyant air circulation. They are most productive in full sunlight but the leaves can sunburn. They can be grown in the high shade of fruit trees such as persimmon or on the north side of buildings. American gooseberries are much more sun tolerant. Plants collapse quickly when soil or air temperature exceeds 85 degrees F. The deep purple fruits are the size of seedless grapes. They are very vigorous in growth. Flavor is very good to excellent when they ripen on the bush. Black Velvet has won awards for its superb qualities and disease and mildew resistance. Zones 4-7.

They are very productive with dark red medium sized fruit on upright plants up to 3 feet tall.

The deep purple fruits are the size of seedless grapes. They are very vigorous in growth. The flavor is very good to excellent when they ripen on the bush. Black Velvet has won awards for its superb qualities and disease and mildew resistance.

The ease of culture commends these fruits; though they grow under neglect, good care is well worth the effort. in fact, no other fruit responds more to cultivation and manuring than Black Velvet; in home gardens mulching often successfully takes the place of cultivation.

Cultivation should be frequent and in most soils shallow, so as not to destroy roots or tear out plants. In the home garden, the ground may be kept in good condition by digging up with a spade in early spring followed by hoe cultivation through the summer. or in small plantings the plants can be mulched with straw, hay or in heavy clay soils.

A good dressing of manure is most helpful in maintaining fruitfulness in the bush fruits. Supplement manure with a dressing of 5-10-5 fertilizer. An occasional dressing of wood ashes, from which the plants get lime and potash, is also to the liking of these fruits. See to it that there is always an abundance of organic matter in bush fruit soils.

Pruning is easily done, but the gardener must know about the bearing habits to do the work well. Gooseberries bear fruit near the base of one year-old shoots and on spurs from older wood. Perhaps the best fruit in most varieties is borne on two- and three-year old wood. All canes over three years of age should be pruned away, leaving six or eight vigorous canes. If the variety has a sprawling habit, cut out the prostrate canes; while those with an upright habit of growth should be thinned out in the center to let in air and sun.

Perhaps no fruits in the garden are less often preyed upon than the bush fruits, yet the currant and gooseberry need careful attention for the currant worm. The imported currant worm is a green worm with black spots which appears in the spring and devours the foliage, soon stripping the bushes. A second brood appears about July 1, and a third brood may appear late in the season. The insect can be controlled with Bacillus thurigensis when early stages of damage appear or one week before. if the first brood is destroyed, the late ones will not appear.

Powdery Mildew is often serious on European varieties of gooseberries and to a lesser extent on the American. It appears on the young leaves, shoots and fruit as a whitish powdery mold, which later turns to reddish brown. Good air circulation is essential for these shrubs.

Gooseberries are a good desert fruit and can also be made into jams, jellies, wines.