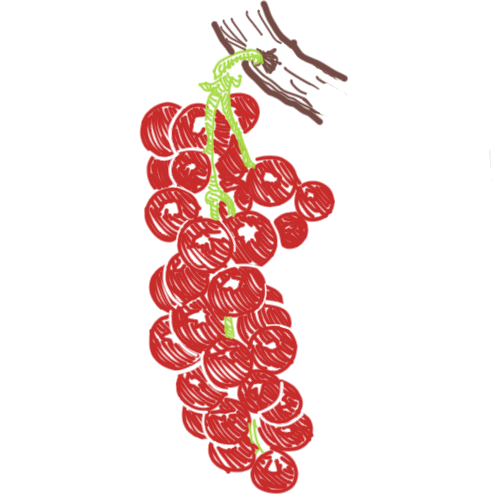 Ripening in July, currant (Ribes) bushes give us fruits that hang down like little jewels in the hot summer sun. That has been said so many times, it’s a bit of a cliche, but these fruits are lovely to behold.

Like their cousins, gooseberries (the genus Ribes), currants are native to Wisconsin woodlands, fence rows, and fields. Yet, despite being native and well suited to growing in Wisconsin, they are still not a very well known small fruit. Although this plant has been grown in the United States since colonial times, it can serve as host to white pine blister rust. This relationship to white pines led to a federal ban on currant plants in 1912 to protect pine trees and the lumber industry. Newer currant and gooseberry varieties have been bred with rust resistance; thus, planting these fruits is no longer a concern in the Upper Midwest region.

Planting remains restricted in some areas of the United States. The ban was lifted in 1966, but by then currants were no longer part of the culinary cannon here. This situation is changing because currants are easy to grow, can be grown locally, and are full of Vitamin C.

A perfect understory shrub, different cultivars of currants have been developed. All do well in northern climates, and these 4- to 6-foot fruiting shrubs can handle some shade, which makes them adaptable for food forests. The fruits come in red, white, pink, and black, and each color has a distinctive flavor. Black currants, which have an earthier taste than the other varieties, are high in antioxidants.

You can easily distinguish currants and gooseberries by examining the canes and fruit. Gooseberry canes normally produce a spine at each leaf node and bear roughly grape-sized berries singly or in groups of two or three. Currant canes lack the spines and bear 8 to 30 pea-sized berries in clusters.

A mature currant or gooseberry shrub can produce up to four quarts of fruit annually. If the currants are grown in partial shade, you will get less of a harvest. Most commercially available varieties have adequate winter hardiness for the majority of the Upper Midwest, many to USDA hardiness zone 3a.

Currants will tolerate marginal soil, but they will perform best in rich, well-drained soil. You do not want to plant them in hot, dry conditions. In late fall, apply a few shovels-full per plant of composted material rich in nitrogen, such as well-rotted manure.

Although you can check out the links below, which go into detail about currant production, here are a few brief tips:

You may expect to get fruit 1 to 3 years after planting. These fruits can be used to make jellies, jams, syrups, wine, and all the uses for which small fruits are used. They are tart and are becoming more popular in savory dishes, such as with meats.

Currants are a part of our Basic Starter Kit because they are so easy to grow and adaptable for many purposes.

The University of Minnesota

Check into currants. We are certain you will enjoy them.

Wisconsin allows any variety of gooseberry or currant to be grown without specific rules/regulations. Across the border into Michigan, one must get a permit, and there are restrictions on the named variety permitted due to white pine blister rust.
Go figure.

Thanks for sharing. Interesting.

Growing up, in a small town in rural Iowa, we had a neighbor who grew currants, along with small fruit trees, but I’ve had trouble finding them in Wisconsin, at farmer’s markets and even at our local grocery store, which often sells produce from area growers.

Hi Denise. They are easy to grow but quite labor intensive to pick. That is probably why you don’t see them for sale.

Currants, [black and red] and gooseberries are some of the easiest fruit to propagate by layering:
1/ Clear the area around your bushes of weeds and have mulch ready.
After you parent bush has fruited, the new growth will be green and tend to bend down [that is how they “self layer” in the wild, so you are just helping Nature by layering].
2/ Bend the new growth at the union between old and new growth to the ground and bury it into clean soil [free of weeds]. Some folks like to injure that stem to make better contact with the ground. I have not found it necessary.
3/ If the buried union wants to spring back up, place a brick or a stone on top of it. [Make sure to mark the area for the lawnmower!]
4/ In the spring, you will have as many new plants as unions you buried. Cut the stem closer to the mother plant, right where it goes into the ground. Dig carefully with as much soil as you can spare, to retain all the small roots and transplant immediately where you want it.
5/ Add new soil by the mother to repeat the layering.
6/ Fertilize the new soil by Mom in late fall to late winter so she keeps giving you her offsprings yearly.