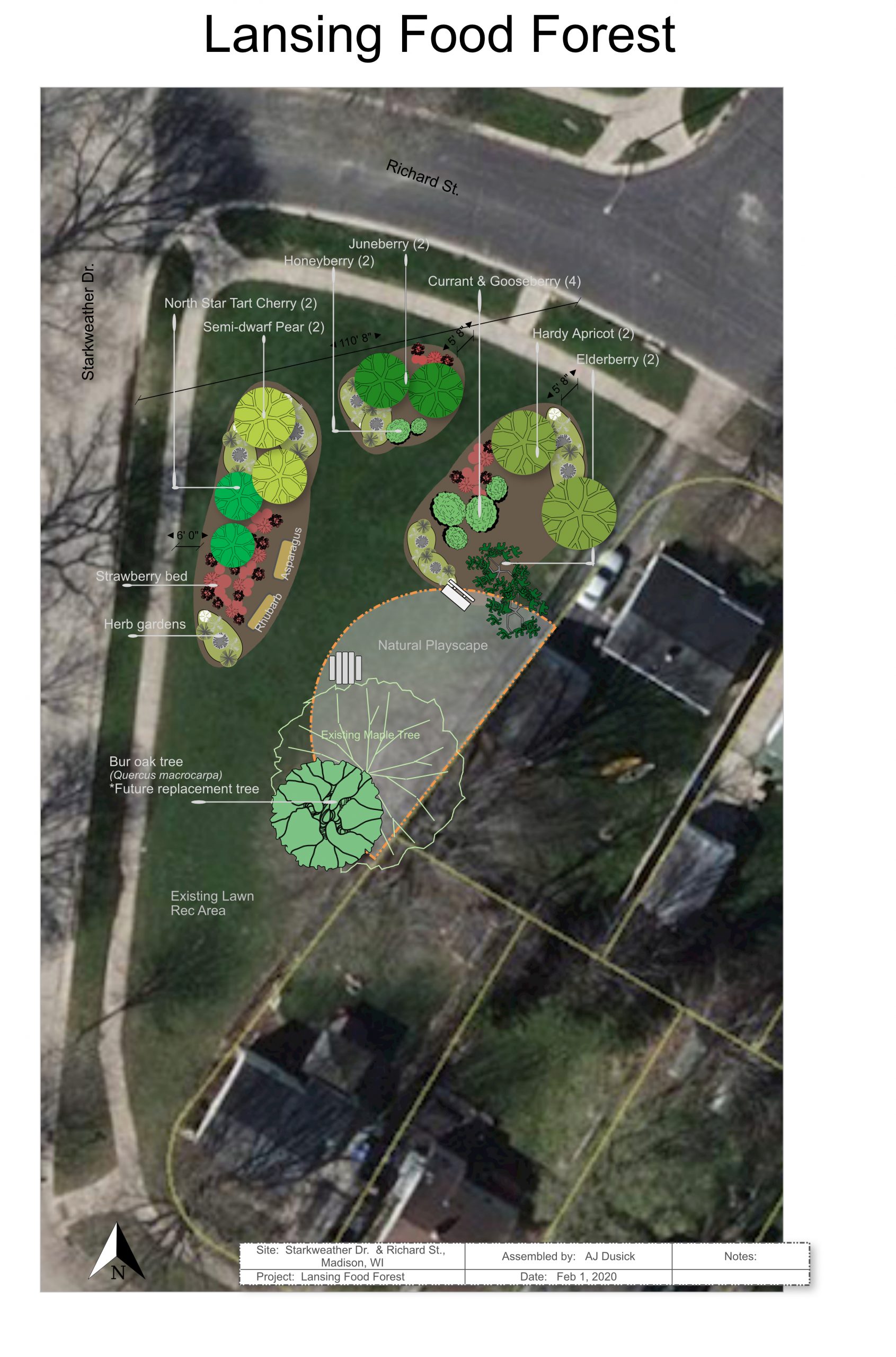 Through the City of Madison Edible Landscapes Permit Process, the City of Madison provides an opportunity to plant fruit and nut trees in parks and on other City-owned land. Groups of citizens can create and care for these edible landscapes for the benefit and use of the whole community.

Although the City of Madison provides the land, the interested parties must provide funding for plants and infrastructure. In our case, the Eastmorland Community Association (ECA) contributed $270 for the plants. We thank the ECA for their generosity.

In February 2020, Emily Steinwehe completed the application for an edible landscape at the corner of Richard Street and Starkweather Drive in the Eastmorland neighborhood on Madison’s east side.

Emily’s proposal was accepted and we began installing the Lansing Food Forest in May. Lansing was the original farm before houses were built in this neighborhood, and Lansing Place was the name of the first development before the greater Eastmorland name was given for the larger neighborhood.

The area of the new food forest is a corner lot planted to grass. We have sheet mulched the area by laying down cardboard and putting a thick layer of wood chips on top of the cardboard. Because the trees and shrubs are small, the span of wood chips provide plenty of room to intermingle other layers of plants until the trees and shrubs have grown large enough to cast shade. We enjoyed planting asparagus, thyme, sage, oregano, chamomile, strawberry, rhubarb, pumpkins, squash, and watermelon.

The Lansing Food Forest project, our largest project for the year, posed particular challenges for Wisconsin Food Forests. We were unable to use our volunteers as much as we would have liked because of Covid 19 and the need for social distancing. We are still putting the finishing touches on the planting and mulching. You are welcome to volunteer! To do so, send us a message through our contact form.

The neighbors who took the survey were also interested in a Bur Oak (Quercus macrocarpa) as a shade tree, a natural playground with a wood chip substrate and stumps for climbing, a bench, and a picnic table. Wisconsin Food Forests will create the playground in the fall with the help of volunteers.

Grant Foster, District 15 Alder, has been a great ally in this project. Foster says, “I’ve been a huge fan and supporter of the Lansing Food Forest since Emily first told me about the concept. It has been so wonderful to see what was just a chunk of grass turn into something so special.”

Our vision is that this community food forest will be a meeting space for neighborhood residents to gather. Grant Foster says, “The plant swap that was held here a couple weeks back was a good preview of how this space will be used in the future.”

What was the plant swap? The Erin McWalter plant swaps have become somewhat of a tradition in Eastmorland. Residents bring extra seeds and plants to the exchange and everybody takes what they want. But imagine planning such an event in the times of social distancing. We were aided by the size of the plot and Erin’s ingenuity. On June 10, our networker Erin set up stations all over the Lansing Food Forest and labeled them by category: Houseplants, seeds, containers, garden tools and supplies, miscellaneous, veggies, and perennials. Masked, socially distanced participants were able to help themselves to containers and take home whatever seeds or plants appeal.

I am usually a major contributor to the plant swaps, having native plants and perennials that love to multiply. The fledgling food forest was hopping with activity when I stopped by. The best news Erin reported back was that every single item was taken by somebody.

Alder Foster sees potential for the future: “Once the Garver Path is constructed next year, this will be a gem along the new recreational and transportation corridor.” The Lansing Food Forest has its own Facebook group where you can follow news.

Come check out this gem at the corner of Starkweather Drive and Richard Street. We look forward to its development in coming years.

This is a beautiful! What a fantastic project! I’m wondering what variety of hardy apricots you planted?

Thank you! We are not sure about the variety. We are getting them from someone who lives nearby in the Lake Edge Neighborhood.