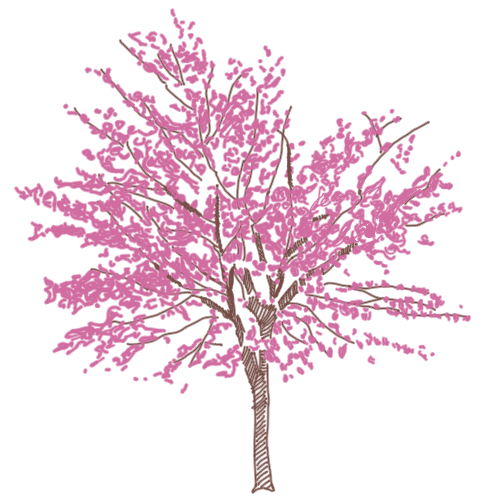 The first spring I spent in Madison, I was surprised and delighted by the gorgeous, magical trees with the lavender (Pink to reddish purple flowers) diaphanous blooms that resemble lace. Madison is loaded with these beautiful trees, which I learned were Eastern Redbud (Cercis canadensis L.). It is a native deciduous understory tree that often is multi-trunked with a rounded crown that typically matures to 20-30 feet tall with a slightly larger spread.

Eastern redbud is usually one of the first trees to bloom in spring (March-April) before the foliage emerges, with flowers that grow on old twigs, branches, and trunks.

According to Penn State Extension and the USDA Plant Database, the Redbud tree is a member of the Fabaceae or pea family (legume) family, but they do not help fix nitrogen in the soil. Most members of the legume family have nodules on their root systems that form a symbiotic relationship with certain bacteria in the soil which fix nitrogen, but the Redbud tree is not one of them.

Eastern redbud is found throughout the lower Great Plains and eastern United States. This tree is native to eastern and central North America from Connecticut to New York to southern Ontario and the Great Lakes south to Western Texas and Florida. Flowers are followed by flattened leguminous bean-like dry seedpods (to 2-4 inches long) that mature to brown in summer. Each pod has 6-12 seeds.

Eastern redbud occurs as scattered trees or small populations. It is an understory species in open woods and is found on moist loam or sandy soils in valleys or bottomlands. Usually this tree is more numerous on south facing slopes with more sunlight. Eastern redbud grows on a wide range of pH; however, it grows best on soils with a pH of 7.5 or above. It is not found on inundated sites, poorly aerated soils, or coarse sands. The tree is fire tolerant and the roots will sprout after fire.

Eastern redbud develops a deep taproot that grows quickly the first few years under conducive conditions. Because of that deep taproot, they do not transplant well and should be planted where they will stay. Pruning the tree helps develop a strong structure.

One preventative measure is to collect the mature pods in fall before they open and release seed or insects. Weevils, in particular, attack the seeds.

Although the redbud does have edible flowers and these flowers attract pollinators, the main reason this tree is a part of our Basic Starter Kit, is what Emily calls, “a nod to beauty.” We grow food forests for many reasons, and their beauty is one of them.